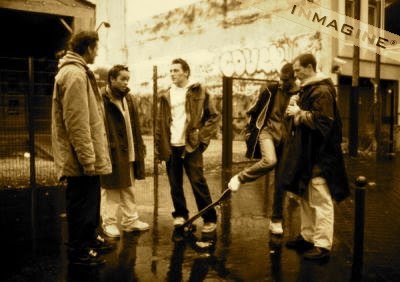 It is apparent that there are patterns in the ordinary social interactions between individuals in various societies. Whether and how to greet an acquaintance or a stranger, how close people stand together, how loudly people speak, what subjects they turn to in idle social conversation, how conflict is handled -- all of these topics and more seem to have specific and nuanced answers in various specific social environments. And it seems likely enough that there are persistent differences at this level of social behavior across cities, gender, race, and class.

On the first question, there is no doubt that there are researchers and traditions that have addressed exactly these sorts of questions. Erving Goffman's writings are most directly relevant (for example, Behavior in Public Places: Notes on the Social Organization of Gatherings

), and urban anthropologists and sociologists are often interested in micro-descriptions of social behaviors as well -- for example, William Foote Whyte's Street Corner Society: The Social Structure of an Italian Slum

Here is one of Goffman's descriptions of his goals:

By and large, the psychiatric study of situational improprieties has led to studying the offender rather than the rules and social circles that are offended. Through such studies, however, psychiatrists have inadvertently made us more aware of an important area of social life -- that of behavior in public and sempublic places. Although this has not been recognized as a special domain for sociological inquiry, it perhaps should be, for rules of conduct in streets, parks, restaurants, theaters, shops, dance floors, meeting halls, and other gathering places of any community tell us a great deal about its most diffuse forms of social organization.

Sociology does not provide a ready framework that can order these data, let alone show comparisons and continuities with behavior in private gathering places such as offices, factory floors, living rooms, and kitchens. To be sure, one part of "collective behavior" -- riots, crowds, panics -- has been established as something to study. But the remaining part of the area, the study of ordinary human traffic and the patterning of ordinary social contacts, has been little considered. ... It is the object of this report to try to develop such a framework. (Behavior in Public Places, 3-4)

The school of ethnomethodology also attempts to provide this kind of detailed observation and description. This approach is illustrated, for example, by Harold Garfinkel's descriptions of the procedures embodied in the practices of professional accountants or lawyers in Studies in Ethnomethodology

. A major objective of the method is to arrive at an interpretation of the rules that underlie everyday activity and thus constitute part of the normative basis of a given social order. Research from this perspective generally focuses on mundane forms of social activity--e.g. psychiatrists evaluating patients' files, jurors deliberating on defendants' culpability, or coroners judging cause of death. The investigator then attempts to reconstruct an underlying set of rules and ad hoc procedures that may be taken to have guided the observed activity. The approach emphasizes the contextuality of social practice--the richness of unspoken shared understandings that guide and orient participants' actions in a given practice or activity.

So there is quite a bit of work in anthropology and sociology that chooses to provide careful observation and description of concrete social behavior.

But there is a more fundamental question to ask: in what sense is this research scientific? What would a scientific study of the patterns of face-to-face social behavior need to provide? And why would this subject be of genuine interest from a scientific point of view?

One feature that stands out in the work of Goffman, Whyte, Liebow, or Garfinkel is the commitment of these observers to careful, detailed observation and description of social behavior. They are interested in capturing the nuances of ordinary behavior, and their research reports give a great deal of emphasis to the importance of providing detailed descriptions of ordinary social interactions. And in fact, it seems very reasonable to say that this body of descriptions is itself scientifically valuable and intellectually challenging, perhaps in some of the ways that the careful observations and descriptions produced by Darwin or Wallace in the Galapagos or Malaysia are scientifically important. Here the standard of scientific value is empirical: it is very important for the observer to "get it right" -- to accurately observe and record the fine differences in behavior that are embedded in the social contexts that are observed. (See an earlier posting on the subject of descriptive social science.)

But we can also discern a second scientific objective at work in these kinds of writings, either directly or indirectly -- the goal of arriving at an explanation of the patterns of behavior that are uncovered through this micro-descriptive work. Any body of phenomena that demonstrates consistent patterns over time is potentially of scientific interest, because the observable patterns imply an underlying causal order that ought to be discoverable. And this is the more true if there are stable differences in the patterns across contexts. If there are very specific patterns of behavior in these mundane situations of social encounter, how are we to explain that fact? What sort of structure or fact could count as a cause of these patterns of behavior?

One particularly appealing approach to explanation in these circumstances is to make an inference from behavior to rules that is familiar from Chomsky's view of generative linguistics -- from patterned behavior to the underlying "grammar" or system of rules and mental paradigms that produces it. So we might go a bit beyond Goffman's own description of his work, and say that his detailed descriptions of social behavior invite him to reconstruct the underlying and psychologically real set of rules that "generate" the behavior. Here we are invited to consider the social actor as possessing a "grammar" of ordinary behavior that guides the production of actions in specified circumstances. And in fact this interpretation of the intellectual project of this work seems pretty consistent with Garfinkel's approaches.

There is a third angle that one might take on this work -- that it is a part of "interpretive" social science; that the descriptive work is an effort to provide an interpretation of the meanings of the actions described. This doesn't seem quite right in application to the works mentioned here, however. Goffman's work or Whyte's descriptions aren't exactly hermeneutic; instead, they are guided by an effort to discern and capture the smallest nuances of behavior, with an eye to discovering the underlying rules that appear to generate the behavior. The orientation of the work is not so much directed to underlying meanings as it is to underlying rules.

In short, it seems to me that the careful observation and description of the subtle complexities of ordinary social behavior is in fact a valuable contribution to a scientific understanding of the social world -- even though it is primarily descriptive. The patterns of behavior that Goffman, White, or Liebow document are a genuine and novel contribution to our knowledge of the concrete social world. And these contributions to descriptive sociology can be fitted into next-generation efforts to provide explanatory contexts that would make sense of the patterns that these researchers document.
Posted by Dan Little at 10:47 PM