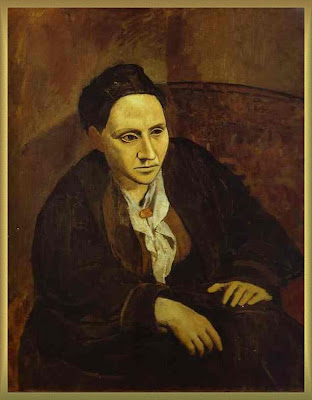 images: Picasso, Portrait of Gertrude Stein (1906); Courbet, Burial at Ornans (1849)
Conventions define how to do things correctly -- trim the hedges, choose an outfit for an evening at the opera or the racetrack, how much to tip the server. They also define or constrain productions in the arts -- writing a short story or a sonnet, performing a Brahms quintet, participating in an Andean flute group. We might define a convention as a stylized but unwritten rule of performance. A tradition is an extended set of conventions for a given area of performance. We can refer to traditions of classical German chamber composition, Japanese landscape painting, or hiphop street performance. A conventional act or performance, then, is one that directly and consistently expresses the relevant conventions.

So -- at any given time, a particular set of conventions drive the creation of works of culture and guide the interpretation of the product. These conventions are somehow embedded in the community of creators, viewers, and critics. And innovation, breaking or stretching the rules, creates the possibility of novelty and creativity within the process. It is important to notice, though, that conventions generally don't govern every aspect of a performance. The convention of the sonnet mandates a form and meter and gives some constraint on subject. But it would certainly be possible to write a sonnet in deviant meter in praise of a farm tractor; the audience would be able to make sense of the production. So the artist always has a degree of freedom within the tradition.

I find several specific ideas to be useful in analyzing cultural conventions and their products -- in particular, "idiom", "voice", and "novelty". Within a given medium, there is an existing stock of shorthand ways of expressing an artistic or symbolic idea. We may refer to these modes of expression as "idioms" of the genre. When the stranger in the 1950s western is wearing a black hat, the audience understands he is the villain. When the soundtrack swells in an ominous minor key the audience knows there is trouble coming. These idioms aren't natural signifiers; rather, they are conventions of the B movie. So the idioms of a genre are a particularly direct form of convention within the semiotics of the genre.

"Voice" is a counterpart of originality. It is the intangible "signature" that the individual artist brings to his or her work -- what Eisenstein brings to many of his films, distinctive from Bergman and Kurosawa. Voice represents a kind of consistency over time, but it is not defined by homage to tradition; instead, it is an expression of the specific sensibility of the individual artist, the specific way in which this artist forges together his/her material and vision within the resources of the genre and its conventions. Eisenstein's films aren't formulaic, even though one can recognize a common sensibility running through them.

What about novelty and creativity? Novelty is the break outside of convention that the artist brings to the production in order to express a particular idea or perspective in a new and forceful way -- for example, the transition from sepia to color in The Wizard of Oz. The original and genuinely creative artist or writer finds ways of bringing novelty and his/her own originality into the production, giving the audience new and unexpected insights and ideas. The element of innovation needs to point the audience towards its signification without relying wholly on the existing traditions of reading. (Picasso's portrait above of Gertrude Stein displeased some friends of the writer because "it doesn't resemble Gertrude Stein." Picasso is said to have replied, "It will.")

But here is an apparent conundrum of creativity and convention. Any performance or artistic work that is wholly determined by the relevant conventions is, for that reason, wholly uncreative. It is like a conversation in a Dashiell Hammett novel: no surprises, each gambit programmed by the conventions of the crime novel. Or it is like a string quartet composed by an earnest follower of Beethoven, with no phrase breaking the flow, no note out of place. And for the careful listener, each is ultimately boring; there is no novelty in the work. And there is no opening for the original and creative voice of the creator. Originality and new perspective have no place.

But now the other half of the conundrum: novelty without regard to the frame of tradition is incomprehensible and meaningless. The classical composer of 1800 who somehow heard the world atonally, arhythmically, and to the accompaniment of falling trash cans and who then wrote a symphony in thirty movements on this basis -- this composer is innovating, all right. But he/she is not creating works that any existing audience could hear as "music". There is no bridge of meaning or hermeneutic practice to facilitate interpretation.

It is relevant here that we are led to refer to the audience. Because cultural products require the conveying of meaning; and communication of meaning requires some reference to conventions shared with the audience -- whether in music, painting, literature, or hiphop. Meaning of any cultural performance is inherently public, and this means there have to be publicly shared standards of interpretation. The audience can only interpret the performance by relating it to some set of conventions or other. These may be conventions of representation, structure, or mythology; but the audience needs some clues in order to be able to "read" the work.

There are, of course, periods in art history where it appears that innovation is all and continuous convention is nothing. For example, Courbet and the realist painters were evidently shocking to the viewing public for their dismissal of the classical values of the Salon -- in the Burial at Ornans above, for example. But really, there was a great deal of continuity within the context of which the realist manifesto was shocking to the public. (T. J. Clark does a great job of "reading" the painting for its continuities with previous traditions of painting and the sources of its originality; Image of the People: Gustave Courbet and the 1848 Revolution

So what does all of this imply about "creative breakthroughs" in the genres of the arts? It seems to imply that major and culturally significant breakthroughs occur when talented people fully absorb the semantic (and historically specific) conventions that define the genre at the current time; he/she finds ways of squeezing every bit of new meaning out of these conventions in the production of the cultural product; he/she plays with the limits of the convention, testing them for the possibility of forging new meanings; and sometimes, he/she breaks a convention altogether and substitutes a new meaning maker in its place (presenting Julius Caesar in the garb of fascist Italy of the 1930s, for example).

These topics are relevant to understanding society, because this dialectic of convention, innovation, and meaning-making is virtually pervasive in everyday life. Jokes, business meetings, and street demonstrations all have some elements of this dance of meaning, convention, and originality. So it is important to gain greater understanding of the intersection of convention and innovation.

(There are numerous unanswered questions raised by this topic. How is a tradition of painting or composition related to a scientific or technological tradition? How is a literary or artistic tradition related to a "style" of technology or a scientific research programme? How can we take measure of "radical innovators" in the arts such as Jackson Pollock and abstract expressionism, or John Cage and American experimentalism in composition? And how do beauty or aesthetic value come into this equation? What are the qualities of a work of art that lead us to say, "That is beautiful!" or "that is hideous!"? What are the threads of convention, form, meaning, and originality that contribute to great aesthetic value?)
Posted by Dan Little at 3:39 PM

These issues of tradition and innovation seem to me to be related to the arguments of Davidson and Quine regarding radical incommensurability. Just as is the case between different cultures, there must be something in common in order for a language (for example) to be recognizable as a language, so with artistic traditions. Something can be recognized as innovation only if it retains sufficient commensurablity with the tradition to be recognizably a part of that tradition.

I'm thinking that your observations apply to political commentary and persuasion.

Even if you see clearly what is happening, unless you have the skill to couch your understanding in terms of what people are already thinking and believing, you won't influence many people.

>>These issues of tradition and innovation seem to me to be related to the arguments of Davidson and Quine regarding radical incommensurability.

And, of course, the limitation on human thinking that is called cognitive dissonance comes to mind.

Both points are useful. And they both highlight a central difficulty: how do you get the audience from familiar ideas and interpretations to novel ideas? If the political audience is prepared to translate all political commentary into "Whigs and Tories", then how do you make a point that is more of an Orwell-socialist perspective? I think your comment about cognitive dissonance theory is directly related; as I understand the notion, it has to do with the concept that people work very hard to fit their observations into familiar categories -- thereby making it extremely difficult to recognize novelty.

This is such an interesting debate. The paradox of novelty - essential to further develope the arts and society but at the same time hard to make people understand. On the other hand, if done correctly, novelty is exactly what will get people's attention...very complex. It's like you say in the article (as i interpreted it) - to innovate further, the artist needs to find her balance on the "limits" and frameworks of the already conventional.