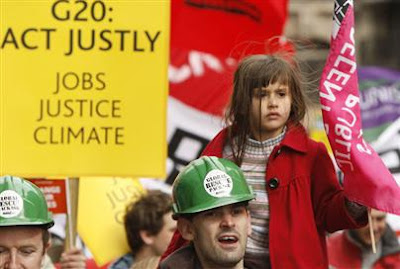 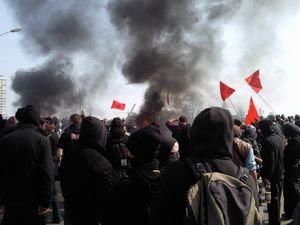 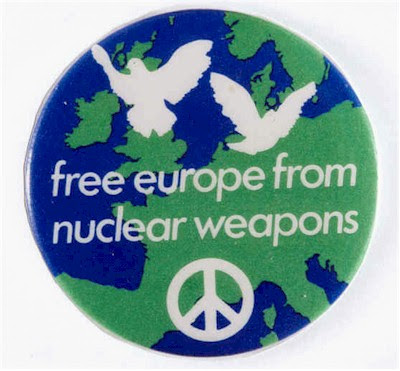 We've seen a fairly large increase in the occurrence of large international protest movements in the past thirty years. The anti-nuclear movement of the 1980s drew a substantial following across Europe and to some extent North America. (Historian E. P. Thompson played a significant leadership role in the Campaign for Nuclear Disarmament; see for example PROTEST AND SURVIVE

.) Anti-globalization protests in Seattle, Washington, and Davos drew substantial support from international organizations and participants. Major anti-war protests occurred in numerous European cities after the onset of the US-led war on Iraq. And now protests in London against the G20 meeting and in Strasbourg against NATO have drawn supporters and groups around Europe (post). (Here is a current account of the Strasbourg protests in the Dernieres nouvelles d'Alsace.)

These movements are riveting in a number of ways, from the point of view of sociology and international politics. We can ask questions at every edge of the phenomena:

Mobilization. What processes of mobilization and organization are at work in these specific periods of mass mobilization? To what extent do modern transnational protests embody a significant degree of common purpose and political identity? (Here's a recent post on the difficulty of defining a group mentality.) What organizations have the most influence in determining the strategy and tactics of the mass political actions that are called for? What networks of leaders and counter-politicians can be discerned in the period of mobilization leading up to the mass event? What is the nature of the networks that exist within the various communities of interest -- environmentalists, anti-war activists, anti-globalization activists? What sorts of issues have proven most potent in mobilizing significant numbers of adherents and organizations from different countries? What motivates followers to heed the call and bring themselves to London or Strasbourg? What is the combination of commitment, identity, and adventure that results in involvement?

Internal politics. What factors internal to a movement -- whether environmentalist, anti-globalization, anti-war, anti-nuclear -- lead to cohesion and dissension within the movement? What factors lead to the occasional outbreaks of violence between protesters and police? (See an earlier post on this question.) Is violence a deliberate tactic on either side -- militants or forces of order? What role do organizations such as anarchist groups and other radical, rejectionist groups play within the broader movement? Is it possible for small groups of rejectionists to "hijack" the large demonstration for their own purposes?

These questions overlap several distinct areas of research: resource mobilization theory, social movements, international relations theory, and comparative politics. (This is a point that McAdam, Tilly, and Tarrow make in Dynamics of Contention

: there is much to be gained by studying these contentious movements across the traditional areas of study.) And the questions are probably further complicated by the availability of internet-based forms of communication and mobilization.

Sidney Tarrow has turned his attention to international protest movements as a particularly interesting form of "contentious politics." His 2005 book, The New Transnational Activism

, treats international protests and their movements from the point of view of the Tilly-McAdam-Tarrow framework of theory and analysis of contentious politics. Here are a few framing assumptions from the introduction:

Students of domestic movements long ago determined that collective action cannot be traced to grievances or social cleavages, even vast ones like those connected to globalization. Acting collectively requires activists to marshal resources, become aware of and seize opportunities, frame their demands in ways that enable them to join with others, and identify common targets. If these thresholds constitute barriers in domestic politics, they are even higher when people mobilize across borders. Globalization is not sufficient to explain when people will engage in collective action and when they will not.

Nor does combating globalization automatically give rise to "global social movements." For Charles Tilly, a "social movement" is "a sustained, organized public effort making collective claims on target authorities" that uses a well-hewn contentious repertoire on the part of people who proclaim themselves to be worthy, unified, numerous, and committed.

For one thing, forming transnational social movements is not easy. Sustaining collective action across borders on the part of people who seldom see one another and who lack embedded relations of trust is difficult. For another, repertoires of contention grow out of and are lodged in local and national contexts. Even more difficult is developing a common collective identity among people from different cultural backgrounds whose governments are not inclined to encourage them to do so.

Tarrow's central hypothesis about transnational protest movements comes back to the core idea of "opportunity structures." International organizations and networks have created a new set of opportunities for transgressive groups who have an interest in challenging the status quo.

Tarrow identifies several important types of sources of evidence and theory for his current work: international political economy, anthropologists and students of public opinion, specific studies of international protest events, studies of transnational networks and institutions, and theorists of the idea of "global civil society." He explicitly locates the book as falling squarely within the research program established in Dynamics of Contention; his goal is to make use of this ontology of social mechanisms and processes to provide a sociology of transnational protest.

What I'm eager to see is some of the concrete empirical work that this approach suggests: specific empirical studies of the networks, organizations, and dynamic processes through which major transnational protests have unfolded in the past decade or so. It would seem that some important new tools helpful for such study are now much more readily available -- essentially, using the internet to track organizations, announcements, and efforts at mobilization. Tarrow provides some of this research -- for example, in his summary of research on the networks and localism of participants in the "Battle of Seattle". But this level of analysis seems to be where the action needs to be at this point in the study of transnational social movements. But Tarrow is certainly right in thinking that this subject area is important, and it is one that follows very logically from the framework of analysis of social contention developed by himself, Doug McAdam, and Charles Tilly in the earlier Dynamics of Contention.
Posted by Dan Little at 11:20 AM