French sociology as a distinctive tradition 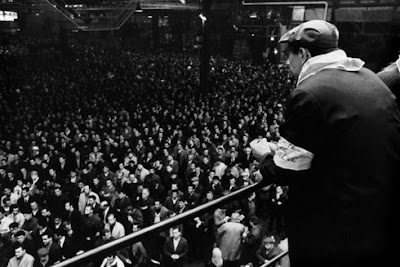 One might think that the globalization of intellectual life has led to the result of the "unification" of major scientific disciplines around one shared set of global assumptions about the discipline: what the major unsolved problems are, what the discipline should strive to achieve, what the products of knowledge ought to look like. From the outside, anyway, one imagines that there is just one "world physics," governed by roughly the same assumptions whether practiced in Berne, Chicago, London, Berlin, or Delhi. (I would find it very interesting to be corrected on this assumption, if any readers can support the idea that there are important differences in national traditions when it comes to high-energy physics or molecular biology.)

In the social sciences, though, this assumption of convergence and unification seems to be incorrect. Instead, it seems to be the case that there are durable national traditions in sociology, political science, and anthropology that are distinct in different national settings; and further, it seems that the fairly extensive amount of cross-fertilization that occurs through international conferences and publications hasn't in fact significantly undermined the durability of these distinct traditions.

A fairly obvious version of this observation arises when we contrast the ways that economic theory is pursued in the United States and India. American economists by and large take the methodological position of neoclassical assumptions about individual behavior, general equilibrium assumptions about systemic behavior, and the assumption of "mathematicization" as a model for how knowledge results ought to be formulated. (Examples might include Kenneth Arrow and Gerard Debreu in the 1950s, and currently Greg Mankiw.) Indian economists, by contrast, seem as a group to be more interested in the human and social content of economic behavior and systems -- the effects that economic processes have on quality of life, the ways in which income and nutrition are related, and more generally, the social relations that correspond to the abstract equations of economic theory. (I'm thinking of scholars such as Partha Dasgupta (An Inquiry into Well-Being and Destitution

) or Amartya Sen (Poverty and Famines: An Essay on Entitlement and Deprivation

) as exemplars of the latter perspective; here is Sen's biographical essay on the occasion of his receipt of the Nobel Prize.)

That's economics; similar observations might be made about political science and anthropology. Here I'd like to sketch out a fairly specific hypothesis: that French sociology forms a substantially distinct tradition of social thinking in the twentieth century, and that this tradition has remained largely intact in spite of the substantial amount of Franco-American interaction that has occurred in the social sciences and humanities. I don't mean to suggest that there are no important themes of convergence, shared issues, and some cross-fertilization between French and American sociology. But I am suggesting that French sociology has developed through French academic institutions and traditions since the 1920s; that departments and research institutes have maintained a degree of continuity in the topics and methods in use; and that these followed a path of development that was significantly different in timing, topics, and methods from the development of American sociology during the same time period. And in fact, when we look at some important recent works of French sociology, such as Didier Lapeyronnie's Ghetto urbain or Stephane Beaud's La France invisible, we get a distinct impression of researchers who have cultivated significantly different assumptions about the nature of sociology. Can we get more specific about this impression?

Making this sort of comparison requires that we compare the recent histories of the two traditions of sociological resesearch and theory. There are a couple of sources that provide some key signposts for the development of American sociology in the twentieth century. I particularly like two of Andrew Abbott's books: Chaos of Disciplines

and Department and Discipline: Chicago Sociology at One Hundred

, a history of the Chicago school. (Martin Bulmer's The Chicago School of Sociology

. I think these books give a pretty good mid-level understanding of the intellectual and institutional steps through which American sociology developed over roughly a 75-year period.

For the French side, there are several recent books that can serve as a mid-level guide to the development of sociology as a social science in France. One is by Céline Béraud and Baptiste Coulmont (Les courants contemporains de la sociologie [Contemporary Currents in Sociology]). The other is by Philippe Masson (Faire de la sociologie: Les grandes enquêtes françaises [Doing sociology: the great French investigations]). Both books appear to be written for a readership that doesn't exist in the United States: advanced undergraduates needing a theoretically sophisticated introduction and guide to the evolution of the discipline of French sociology. And for my eye, both books do an admirable job of presenting the relevant sociological ideas clearly, rigorously, and with nuance. Neither is a research monograph; but neither book descends into over-simplification. So they serve as a good basis for getting an understanding of the geography of the evolution of the intellectual frameworks of sociology in France over the past seventy years.

There are several interesting features of the narrative that the two books offer. Most basic is periodization: they both begin with the post-war period in French sociology. Histories of American sociology generally start with the Chicago school in the 1920s and make the intellectual connections backwards to Tönnies, Simmel, Durkheim, Darwin, and Comte. But these books treat contemporary French sociology as finding its origin in studies of French society following World War II. Béraud and Coulmont write, "In 1945, at the end of the second world war, French sociology no longer existed. It had lost its intellectual force and energy. And the social context didn't really prepare the ground for its revitalization. It was necessary first to reconstruct France from the destruction of war." Masson makes a similar point, writing that "sociology (with its departments, research laboratories, curricula, reviews, etc.) wasn't constituted until relatively recently, during the end of the 1950s and the decade following." And, Béraud and Coulmont suggest, the pre-war tradition of Durkheim's sociology had exhausted itself; so reviving sociological research was not simply a matter of dusting off the ideas and methods of Durkheim and his followers in the 1920s and 1930s.

The choice of 1945, then, is meaningful; the authors appear to suggest that French sociology took a genuinely new beginning after World War II. Béraud and Coulmont break the story up into several major intellectual periods and meta-themes in roughly chronological order: Influences and concepts from American social science come into the account in a few places -- for example, in the discussion of rationality and collective action theory (free riders, methodological individualism) and in the discussion of the influence of Goffman's sociology of interaction. (The sociology of German-born, British-based sociologist Norbert Elias is also credited with being a substantial influence.) But most commonly, the discourses described here, the debates and controversies that are described, are largely self-contained within the precincts of French sociological research.

Philippe Masson offers a different basis for surveying pretty much the same series of developments within French sociology. He picks out a number of important topics and researchers for detailed treatment: Georges Gurvitch, Georges Friedmann, Paul-Henri Chombart de Lauwe, Louis-Joseph Lebret, Alaine Touraine, Michel Crozier, Edgar Morin, Henri Mendras, Raymonde Moulin, Pierre Bourdieu, Jean-Claude Passeron, Luc Boltanski, Pierre Bourdieu, François Dubet, Bruno Latour, Steve Wooglar, Jean Peneff. Topics he highlights include urban sociology, sociology of labor, the study of inequality, the study of the professions, the influence of "constructivism", the study of urban youth, and the sociology of science and technology. Masson notes the influence of American sociology at a number of points (82), including the influence of Talcott Parsons. And he also describes a significant French interest in the American Chicago school of sociology and the approaches of "ethnomethodology". Once again, though, at least in my reading, it seems to me that the narrative that Philippe Masson provides is one that captures a fairly autonomous national tradition of sociological thinking -- with occasional but limited influences from developments in sociology in the United States.

This is a start on the question at hand. Both these books seem to document what might be called in the sociology of science a largely independent research tradition constituting French sociology since World War II. (This impression of independence could probably be tested by a citation analysis.) This tradition defined its own problems for research; debated and pursued a variety of methods of investigation; and formulated some fairly specific ideas about what a finished sociological analysis ought to look like. And it seems to have resulted in a current sociological enterprise that differs in significant ways from current American or British sociology.

What is needed next is a good analytical account of how French sociology differs from American sociology in terms of (a) the topic areas that are identified as most important for investigation, (b) the methods that are regarded as most reliable and scientifically justified (statistical, qualitative, comparative, participant-observer, ...); and (c) the assumptions that exist about what form sociological knowledge should take (deductive theories, narratives of particular social processes, statistical tables, ...).
Posted by Dan Little at 10:08 PM

Marion Fourcade's brand new Economists and Societies undertakes this sort of analysis for the economics profession in 20th century France, Britain and the US. I'm a third of the way through, and find it excellent, both in the details and the style of analysis (institutional analysis done right).

Thanks for the reference -- the book looks very interesting. I'll read it! The argument seems to have something in common with another book discussed elsewhere here: Frank Dobbin, Forging Industrial Policy.

It's not my area of expertise by any means, but from what I know about modern cutting-edge physics, string theory has a stranglehold on the research programs in American institutions. In other countries, that's not the case, and there's a more varied approach to the possible resolution of the divide between general relativity and quantum mechanics.