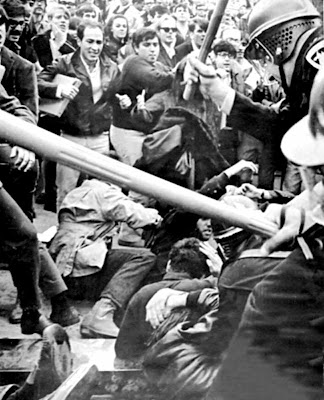 Cohorts sometimes have very different formative experiences. Perhaps this means that they form different ways of taking the world in -- different expectations, different paradigms of how things work, different basic reactions about how to behave. And, in turn, perhaps this makes intergenerational understanding difficult; both younger and older may need to engage in real hermeneutic effort to make sense of each other.

This is often said to be the case for the US birth generations of 1920 and 1950. The former experienced the Great Depression, Tommy Dorsey, World War II, and the atom bomb. The latter experienced Woodstock, Jimmie Hendrix, the Beatles, and the war in Vietnam. The values of thrift, self-sufficiency, and sacrifice attached easily to the "Greatest Generation". Questioning authority, personal freedom in all things, and a weird combination of political engagement and personal narcissism formed the nimbus of the sixties generation.

These truly were very different social, familial, and economic circumstances for the two successive generations. But is it clear that these differences amounted to differences in worldview deep enough to make mutual comprehension difficult? Or are these differences overstated in films and novels (Death of a Salesman, The Graduate, Appocalypse Now), but really small beer in actual fact?

Part of the answer depends on what we think is involved in "understanding" the inner lives and external behavior of others. We observe people's behavior in specific circumstances -- how they treat their friends or children, how they handle important social obligations like the draft, or how they react to tragedy and loss; and we try to reconstruct how they think, feel, and reason. We try to form an idea of what they care about, what they value, and what kinds of principles they honor.

Part of what we mean when we judge we just don't understand the other person's actions, is that we can't assimilate their behavior to anything like our own core values and commitments. Likewise, we have the greatest sense of understanding when the other's conduct is compatible with our own values; we judge "she's pretty much like me in a core way."

When the other's behavior deviates widely from our own values and perceptions -- like Darnton's apprentices in their massacre of Parisian cats, or like the war protester pissing on a flag in the view of the sixtyish VFW witness -- we have to get more actively hermeneutic: what is the perception and valuation of the situation possessed by the other, in light of which his action makes sense to him? We have to actively reconstruct an interpretation of the other person's mental framework.

One thing we know from everyday experience: friendship and extended interaction leads to hermeneutic learning between people with very different starting points. So the fact that we begin with little in common doesn't ensure that we'll stay in that place. But this takes effort, and if there isn't a basis of friendship and mutual respect we may not get there. It explains, too, why parents and their children often do succeed in understanding each other in spite of these generational differences: they care enough to try to figure each other out.

But maybe the example of mid-century America is a pretty clear case; maybe it's true that the world of the VFW sixty-year-old in 1970 is different enough from the draft-resisting protester that they are mutually opaque. They each need the skills of a Geertz or a Maslau to have a meaningful conversation with each other.

But what about today? Are there hermeneutic gaps as wide as this between the 1950, 1970, and 1990 cohorts? Is it possible that the experiences of people now sixty and now twenty-five are just as wide? Are the young truly foreign to the middle-aged? And for that matter -- is it true that sixty is today's forty?
Posted by Dan Little at 5:54 PM