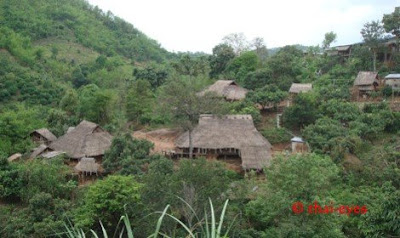 The red shirt demonstrations in Bangkok are very interesting. Throughout March 2009 there were massive demonstrations involving tens of thousands of people. They are mostly supporters of the National United Front of Democracy against Dictatorship (UDD; also designated as DAAD), the mass party of former prime minister Thaksin. And generically they are in opposition to the current government and to the yellow shirt movement that brought it to power in street demonstrations in fall 2008. (These demonstrations succeeded in forcing the closure of Bangkok's airports, which was significant because it threatened the tourist economy upon which Thailand depends.)

The social composition of the red shirt movement is loosely described as consisting primarily of poor people, largely from rural parts of Thailand. The media coverage also makes it clear that the red shirt movement is able to call upon the support of thousands of urban Bangkok people, including taxi drivers. Their immediate demand is for the resignation of the current government, which came to power through undemocratic means. But more generally, the movement seems to call for greater social equality in Thailand and greater democracy.

The question I want to raise here is a pretty limited one but theoretically crucial. It concerns the processes of mobilization through which these tens of thousands of people were induced to travel to Bangkok and involve themselves in extended and increasingly risky demonstrations. In general, massive demonstrations don't just happen; they need organization and planning. How did this mobilization transpire? What national, regional, and local organizations brought it about? I don't have the expertise to answer the question, so I'm putting the issue out here, in the hope that some of the commentators on the #redshirt twitter feed will help with some specifics.

There are a number of different ways in which this mass mobilization might have happened.

One is through the efforts of an effective and extended party organization. It might be the case that UDD is a well-organized and well-financed organization with numerous professional activists in the countryside. There may be village- and town-based UDD offices that maintain a regular presence at the grass-roots level. The activists may be experienced at keeping the grievances alive, keeping political sentiments aroused, and -- when the time is right -- they may have the capacity to mobilize bus-loads of adherents for the trip to Bangkok. On this scenario, mobilization is analogous to the "get out the vote" processes through which political parties in the United States mobilize their supporters at the polls on election day.

Here's a second way the mobilization could work. UDD might be an umbrella organization at the urban center with little grasp into the countryside and villages; but it may loosely lead a number of independent organizations that have a substantial presence in rural areas. Then, through coalition politics and a degree of high-profile leadership, the center and the coalition partners may call for mobilization, and coalition activists at the local level may take the organizational steps needed to elicit hundreds of bus loads of volunteers. This is a bit more challenging than the first scenario from the point of view of maintaining political unity -- each partner may have a somewhat different agenda -- but may be more feasible from the point of view of the level of resources needed by the central party. Here is a posting from April 9 in New Mandala that seems to suggest this type of mechanism.

I suppose there is a third logical possibility as well: a reasonably well-organized central party, no regional partners, but a mobilization that results simply from a widely broadcast "call to action". Crudely -- UDD leaders call for large street demonstrations; the call is broadcast on friendly mass media; and tens of thousands of rural people heed the call and make their way to Bangkok.

Naturally, we can ask exactly the same kinds of questions about the yellow shirt movement; and it is possible that the answers will be different in the two cases. I don't have any way of knowing whether any of these scenarios is close to the realities in Thailand today. But it is worth knowing, and there are many smart observers in Thailand who can shed light on the matter. So, Thai tweeters, how does it work?
Posted by Dan Little at 6:33 PM

Thank you so much for sharing your story. It's very informative. I love to read it and do hope to read your next story.