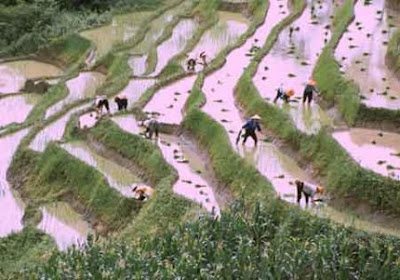 Consider the discipline of the agricultural history of China. The following represent a sampling of research problems concerning the social and economic history of rural China in recent research:
These are all factual questions about features of economy and social institutions. The findings on these topics are, of course, fallible and revisable.

) plays in English studies. Perkins attempts to provide estimates of population growth, cultivated land, and grain output for a period from the late fourteenth century through the mid-twentieth century. Perkins' central thesis is that China's population increased five- or six-fold between the late fourteenth and early nineteenth centuries, and that the agricultural system was able to keep pace with this increase in equal measure by expanding cultivated acreage and by raising the yield per acre (1973:13).

So what kinds of historical and empirical data provide a basis for these sorts of estimates?

For the pre-twentieth century period, Perkins' findings are largely based on primary research: Ming-Ch'ing tax records on population and cultivated acreage, local gazetteers, agricultural handbooks published over past centuries, memorials by local officials to the Emperor, and so forth. He also refers to a large volume of Chinese and Japanese research on the agrarian history of China. The local gazettes provide a great deal of information about the timing and location of markets; commodity prices; land tenure arrangements; and the activities of local elites.

For the twentieth century there are a different set of sources available: rural studies by American or European investigators (Buck, Tawney, and Gamble); data collected by the China Maritime Customs bureau; provincial gazetteers compiled by the Ministry of Industries; and a series of village studies of North China undertaken by the Japanese South Manchurian Railway Company. The earliest twentieth-century studies of the Chinese rural economy in English include Tawney (1932), Buck (1930, 1937), and Gamble (1963). Tawney and Buck provide statistical data describing the state of the Chinese rural economy in the early twentieth century. An important source in current economic research on the early twentieth century is the Mantetsu surveys. These were Japanese field studies conducted by the Japanese South Manchurian Railway Company during 1935-42, and provide extensive detail concerning the structure and organization of the rural economy in selected parts of North China.

In addition to these source materials, there are a number of core studies that have appeared since 1950 that function in much the way that was seen in English economic history. They represent a synthesis of primary data available at the time of publication which later researchers are authorized to draw upon in support of other claims. In addition to Perkins, these include Gamble (1968), Myers (1970), Rawski (1972), Skinner (1964, 1965), and Huang (1984). There is also an extensive literature in Japanese on Chinese economic history.

Current economic history of China depends on previously underutilized sources--local archives, government records, Japanese studies, and the like. Thus Huang (1984) makes extensive use of the Mantetsu surveys, Board of Punishment reports (1984:47), and county archives (the Baxian archives; 1984:51). William Rowe's study of the economic and social history of the city of Hankow is even more closely dependent on primary sources: county gazettes, records of English companies (e.g., Jardine's), and local and provincial government records. This feature may reflect the differences between stages of development of the two disciplines; in the China case there are still extensive primary sources that have not been investigated, and there are correspondingly large and important questions about Ming and Ch'ing economic history which have not been addressed, let alone resolved, in the existing literature.

Perkins pays careful attention to the problem of validating the key estimates of economic activity upon which his analysis depends, and he refers to some of the ways in which he attempts to check the validity of these sources:

I have, in fact, frequently judged the validity of data for the decades and centuries prior to the 1950's on whether these earlier figures were consistent with those for 1957 and with historical developments in the intervening periods. (Perkins 1969:10)

Perkins gives a consistency test for his estimates of population and acreage:

If the pre-modern estimates of provincial population and acreage had been arrived at by arbitrary methods, one would expect yield data derived from such figures to rise in certain periods and fall in others with no apparent pattern. . . . But most of the estimates in Table II.3 for 1850 bear a close relation to the 1957 figures. (1969:20)

Perkins' research predates the current debate about "involution" in the field of Chinese economic history; but his estimates (and those of Bozhong Li) set the parameters for much of that debate. (See "The Involution Debate" for more on this recent controversy.)