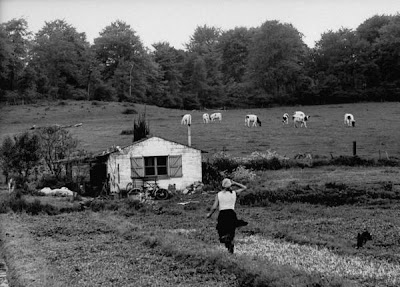 Materialist explanations in history generally attempt to discover fundamental features of technology and labor that impose a very deep imprint on the rest of society. Farming is almost always fundamental in this respect; the forces and relations of production are particularly visible, and the products of the farm system are fundamental to the survival of society. The standard of living of a traditional society is largely determined by agricultural productivity and the nature of the farming system -- nutrition, for example, is essentially determined by the ratio of total grain output to population. Finally, virtually all traditional economies are primarily rural; so farm life defines the conditions of ordinary social existence for the majority of the population. So let us consider a brief analysis of the farm. (A. V. Chayanov's classic treatment of the peasant economy, The Theory of Peasant Economy

, written in the 1920s, remains highly valuable. Robert Allen's lifetime of research on the English farm economy is highly insightful (Enclosure and the Yeoman: The Agricultural Development of the South Midlands, 1450-1850

), as is Bozhong Li's work on the farm economy of the Lower Yangzi (Agricultural Development in Jiangnan, 1620-1850

A farm is the basic unit of agricultural production. It represents the coordinated application of diverse factors of production in order to produce crops. The factors of production include labor; land; tools, implements, and machinery; fertilizers; and water resources and irrigation techniques. Crops include both foods (e.g., rice, wheat, millet) and raw materials (e.g., cotton, soya beans). And farms may be organized for a variety of purposes: to satisfy a family's subsistence needs, to create a profit within a market system, or to provide employment for the greatest number of rural people.

Farms in different agrarian regimes may be characterized in terms of a set of technical and social features. On the technical side we need to know what the scale of cultivation is (farm size); what techniques of cultivation are employed; what varieties of crops and seeds are available; what types of farm tools and machines are used; what types of irrigation, if any, are in use; what varieties and skills of labor are employed; what types of fertilizers are used; and what forms of agronomic knowledge are available to the farmer. (We might reduce this variety of technical features to a spectrum ranging from low-technology to high-technology farming systems.) On the social side we need to know the purpose of cultivation (family subsistence or commercial profitability); the form of land tenure in place (fixed rent, sharecropping, smallholding, etc.); the forms of labor employed (slave, serf, family labor, hired labor); the forms of supervision employed; and the processes of income distribution embodied in the agricultural system.

These features are the primary subject of research for agricultural historians such as Allen and Li. These features essentially determine the most important economic characteristics of the agricultural system. First, they determine the productivity of the farming system, whether measured in terms of land efficiency (output per hectare) or labor efficiency (output per man-day). For once we know the techniques of cultivation in a given ecological setting, it is possible to form relatively accurate estimates of output for a given input of land, labor, and capital. This set of considerations also determines what we might describe as the net rural product--the total agricultural product over and above the replacement cost of the factors of production. On this basis, Chinese historians such as Dwight Perkins attempt to estimate the overall wealth and income of late Imperial China, including estimates of quality of life for the majority of rural people (Agricultural development in China, 1368-1968

Second, the full description of the farming system as indicated above will allow us to infer the system of surplus extraction in place; it will be possible to indicate with adequate precision how much surplus is generated and where it goes. Victor Lippit attempts to arrive at such an estimate for traditional China (Land Reform and Economic Development in China: A Study of Institutional Change and Development Finance

). This in turn permits us to describe the system of rural class relations that correspond to a given farming regime.

Within this framework we can now indicate a variety of types of farms; and as a working premise, we may postulate that agrarian regimes in which different farm types are dominant will have distinctive patterns of organization and development. The following are advanced as ideal types; variants and mixed examples are possible as well. However, these types are selected as being particularly central in the development of both Asian and European traditional economies. And, significantly for the historian of social change, each farming system creates a distinctive pattern of incentives, barriers, social relations, and modes of behavior that have important consequences for historical change.
Significantly, this typology of farming units corresponds broadly to the classical Marxist taxonomy of modes of production: feudalism, capitalism, and socialism. The peasant farm, however, represents a form of organization of the productive forces of rural society that is overlooked in Marxist theory: call it the "peasant mode of production." The peasant mode of production may be defined as a system in which agriculture is performed on peasant farms; the bulk of the population consists of free peasant cultivators; and agricultural surpluses are extracted through rent, interest, and taxation.

In short, careful analysis of the circumstances of farming is crucial for large-scale history, including especially the history of economic development, the history of urbanization, and the history of human well-being. And, of course, the twentieth century demonstrated the centrality of peasants in the great political movements of revolution and anti-colonialism.
Posted by Dan Little at 6:52 PM

I enjoy your blog. As a sociologist with a keen interest in philosophy, I'm inspired by your posts.

Today's post I read after having done some field research on Whole Foods. It got me to thinking: where does the contemporary, capitalist but ORGANIC farm fit in your typology?

It is not for subsistence, but its productivity is lower than capitalist farms. It employs wage labour but is a smaller farm.

In essence, it is a "boutique" farm which is most definitely capitalist but charges a premium for its output (perhaps in this sense it is actually more productive).

I saw a paper presented at an innovation conference regarding organic farming. The author showed that a very small percentage of innovation tax credits extended to organic farming (the vast majority went to "traditional" farming for pesticides presumably).

The tension between these two types of knowledge systems, vis a vis farming, is interesting. What it means, I don't know, but may be interesting to you.

Thanks for the thoughtful comment. Given that organic farms produce for the market, I think the major differentiator is the status of hired labor. So I think I'd probably place the contemporary organic farm in either of two ideal types: commercial family farm (if the bulk of labor is performed by the farmer's family); and capitalist farm (if more than 1/3 of labor is performed by hired farm workers). In either case the bulk of the income of the farm is generated by sale of the crop within the market economy.

There certainly are other variants that seem to exist today in the organic farming world: cooperative farms where there's fairly limited market activity for the product (produce is distributed to members of the coop); and a sort of "off-the-grid" farming system in some communities where there's a lot of barter, some market activity, and a lot of cooperation among producers.

I've just started reading your blogs and I am enjoying them thoroughly. Well done.

I would like to suggest some readings on Middle Ages strip farming in England. Donald (Dierdre) McCloskey, Stefano Fenoaltea, and Douglass North are the relevant authors. They emphasize the role of transaction costs and institutions in the structure and labor relations in farming.

How would you fit the plantation and latifundia into your ideal types? And, in addition to the modern organic and "hobby" farms, the contract farms (where the grower of popcorn, poultry, tobacco has a contract with a corporation) and the large farms which may be owned by a family corporation with extensive use of hired labor.