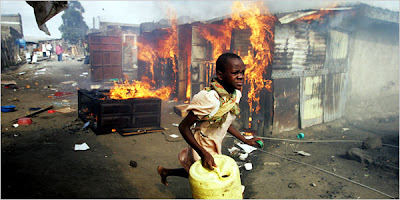 Let's work backwards in thinking about sustained inter-group violence, and begin by considering some of the street-level incidents that constitute a period of violence against or between groups. What factors are necessary to the occurrence of inter-group violence in a region? And how can an understanding of these factors contribute to better strategies of conflict reduction and prevention?

I'm thinking here particularly of ethnic and sectarian violence, including examples like these -- periods of violence in Northern Ireland, upsurges of the Intifada, stone-throwing against vehicles of another group, violent ethnic cleansing in Bosnia, violent settler resistance to resettlement in Israel, ultra-orthodox attacks on more secular Jews in Jerusalem, or Hindu violence against Muslim communities in India. A group of teenagers throw rocks at visible members of another religious group. A cell of young men place a fire bomb in a department store in a Protestant area. A mob rages through a Muslim neighborhood, attacking innocent households. A gang of toughs pressures a minority family to move from the majority neighborhood with threats and beatings. What motivates the participants to involve themselves in these violent actions? And what social factors are necessary in order to turn a few violent individuals into a major violent inter-group event?

Quite a few earlier postings are relevant to various aspects of these questions (thread). And, as has been frequently mentioned here, Charles Tilly's theories of contentious politics are crucial here (Dynamics of Contention

). Here my interest is in line with the idea of promoting peace: if we understand the dynamics of contention better, perhaps we can do a better job of designing institutions and policies that minimize the occurrence of inter-group strife.

We can begin to analyze these examples by providing some analytical questions: what are the contentious social groups?Are acts of violence spontaneous or orchestrated? Are there contentious organizations providing a degree of stimulus and coordination to the violent acts? Are participants "professionals" or ordinary members of civil society? What is the nature of the grievances that motivate typical participants and stimulate the incidents of violence? What role do media play in the etiology of the outburst of violence? (For example, it is now well understood how radio broadcasts were used to spread ethnic killings in Rwanda.)

Studies of contentious politics can perhaps be summarized along the lines of a small handful of causal components:
Who are the followers and what motivates them? What are the organizations that are working towards mobilization for acts of violence? What are the motivations and tactics of leaders of these actions? The role of political entrepreneurs and their private political interests appear to be important factors in the occurrence of ethnic and religious strife. (Atul Kohli offers this kind of analysis of Hindu violence against Muslims in India in Democracy and Discontent: India's Growing Crisis of Governability

.) And finally, what networks of communication and mutual support exist among individuals, leaders, and organizations? (Mario Diani and Doug McAdam have a very interesting recent collection on the latter factor; Social Movements and Networks: Relational Approaches to Collective Action.)

This broad analysis of the components of contention is useful for peace studies because it suggests a number of avenues of strategy and tactics for reducing inter-group violence. Violence requires followers; so reducing the motivations and grievances that ordinary people have to join a violent social group is obviously a positive step. (This pertains to the line of thought expressed in an earlier posting about the relationship between justice and peace.) Violent movements usually require organizations to coordinate and stimulate attacks; so governments and security services can work to disrupt or contain violent organizations. (The multi-decade struggle in the United States against the Ku Klux Klan is an example.) And, symmetrically, people interested in peace can support organizations in the same terrain that reject violence -- thus reducing the appeal of violent organizations. Once the centrality of social networks is recognized in the mechanisms of stimulating, spreading, and escalating violence, security agencies can themselves undertake to map out the networks of violence that exist and disrupt them. And the crucial role that resources play in violent mobilization -- access to funds, weapons, or media, for example -- suggests a strategy of resource denial to the forces of order. The state and other agencies can work to reduce the availability of necessary resources to violent organizations.

It seems apparent that if we are to succeed in reducing social conflict and violence, we need to have a good understanding of the social mechanisms through which these conditions arise. And fortunately, there is a very rich literature on social contention that can be incorporated into the study of the structural conditions of peace.
Posted by Dan Little at 7:25 AM