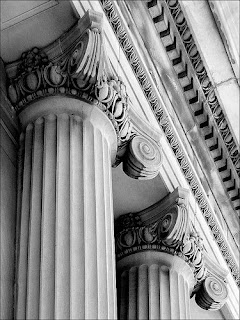 The topic of methodological individualism (MI) came up in a recent posting, and I underlined the connection between MI and some version of reductionism. Here I'd like to take a different approach and ask the question, what considerations can be offered in support of some version of social holism?

Here are a couple of arguments that avoid the accusation of "spooky holism". (By spooky I mean "disembodied.")

First is a very reasonable point deriving from pragmatic objections to reductionism. If we know on ontological grounds that the behavior of the whole depends upon the features and behavior of the constituent parts and nothing else -- the heart of the theory of supervenience -- but also know that it is entirely hopeless to attempt to calculate the one based on facts about the other -- then perhaps it is justified to consider the whole as if it embodied causal processes at the macro-level. So there is a pragmatic argument available that recommends the autonomy of social facts based on the infeasibility of derivability.

Second is the plausibility of the idea that there are large historical or social forces that are for all intents and purposes beyond the control of any of the individuals whom they influence. The fact that a given population exists as a language community of German speakers or Yoruba speakers has an effect on every child born into that population. The child's brain is shaped by this social reality, quite independently from facts about the child's agency or individuality. The grammar of the local language is an autonomous social fact in this context -- even though it is a fact that is embodied in the particular brains and behaviors of the countless individuals who constitute this community. But this is probably similarly true when we turn to systems of attitudes, norms, or cognitive systems of thinking. (See a posting on social practices on this subject.)

It is obvious but perhaps trivial to observe that the vector of influence flows through individuals who possess the grammar, norms, or folk beliefs -- this is the ontological reality captured by the microfoundations thesis. But perhaps a point in favor of a modest holism is this: the fact of the commonality of Yoruba grammar can be viewed as if it were an autonomous fact -- even though we know it depends on the existence of Yoruba speakers. But the point of the holism thesis here remains: that the social fact of the current grammar is coercive with respect to current Nigerian children in specific communities. And, perhaps, likewise with respect to other aspects of social cognition and norms. And this takes us some distance towards Durkheim's central view -- the autonomy of social facts.

Now what about social structures? Can some instances of social structures be treated as if they were autonomous with respect to the individuals whom they affect? Here is how the home mortgage system works -- we can specify a collection of rules and practices X, Y, Z that regulate the transactions that occur within this system. The individual who wants to borrow from a bank or other financial institution is simply subject to these rules and practices. He/she doesn't have the option of rewriting the rules in a more rational or fair or socially progressive way; at a given point in time the rules and practices are fixed independently from the wishes or intentions of the people involved in the institution. Once again it is trivially true that these rules are embodied; but they function as if they were autonomous. And this is true for institutions at the full range of scope, from the local to the global.

The advocate for a modest social holism might maintain two plausible positions: first, that all social facts are embodied in the states of mind and behavior of individuals; but second, that some social facts (institutions, social practices, systems of rules) have explanatory autonomy independent from any knowledge we might be able to provide about the particular ways in which these facts are embodied in individuals. The first is an ontological point and the second is a point about explanation.

These points in favor of a modest holism are compatible with other important points about social entities -- the points about heterogeneity, plasticity, and opportunistic transformation that have been made elsewhere in this blog. In other words, we aren't forced to choose between "agent" and "structure"; rather, agents influence structures and structures influence agents.

These arguments suggest two things. First, holism and individualism are not so sharply opposed as perhaps they appear.

But more important, two styles of social explanation are validated and compatible: the compositional or aggregative model of explanation -- explain the outcome as the aggregative consequence of the behavior of large numbers of individuals -- and constraining or filtering explanations -- the structuring of individual behavior that is created by the workings of social institutions. The first model of explanation corresponds well to the assumptions of methodological individualism, while the second corresponds to the idea that structures and large social factors cause patterns of individual behavior. And neither has antecedent priority over the other. (Some of this variety of explanatory strategies is highlighted in an earlier posting on explanation.)

I just had the opportunity to read James Coleman's piece "A Rational Choice Perspective of Economic Sociology" (from the Handbook Of Economic Sociology, Smelser and Swedberg eds.). He makes some interesting claims about the boundary conditions of rational choice explanations - and perhaps, methodological individualist explanations in general - such as, "Rational choice theory is not appropriate for explaining individual actions, beyond seeing them as rational, given the incentives and constraints." For Coleman, the two approaches he contrasts (a more macro-structural-functionalist approach and a more micro-agentic-rational choice approach) differ in what kinds of questions they are capable of answering. E.g., "One implication of this is that functionalism cannot explain system breakdowns or change; analogously, rational choice theory cannot explain individual breakdowns, or even change in preferences, but can explain system breakdown or change."

Hmm.. the connection to your post seemed clearer to me when I started this comment, so let me wrap up simply by saying that I agree that the opposition between the two positions is overstated, and that, more specifically, the domain over which they have explanatory usefulness may well differ.