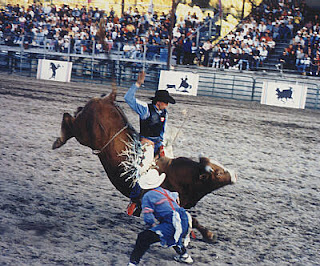 Suppose we have visited quite a few rodeos in Arizona and Texas and have observed a couple of things: there are more injuries in rodeos than in stock car racing or football, the stakes for the winners are lower than in golf, the rodeo riders score higher than average on the "introverted" component of the Myers-Briggs personality profile, some rodeos are almost silent places, and the parking lots are filled with a higher percentage of beat-up F150s than a typical baseball park. What would count as "giving an explanation" of these features of this particular type of social activity? And what kinds of mechanisms might serve as a basis for explanations?

Rodeos are an instance of a broader category of social activity that we migh describe along these lines: "mass entertainment events featuring professional athletes/performers and drawing extensive numbers of paying customers." The comparative judments expressed above take the form of contrasts across several different sub-categories of this broad set -- e.g., baseball, stock car racing, football, golf, soccer, circuses. We might further analyze this group of events in terms of several structural features: the character of the audience, the character and recruitment processes of the performers, the rules of the event, the culture of the activity, the meaning of the activity within the broader society, and the business fundamentals of the event (sources and quantity of revenue).

Let's pull apart a few of the patterns noted above, and consider some social mechanisms that might explain them.

Personality profile of rodeo riders. Rodeo riders seem to have a different social psychology than baseball or soccer players; they are more solitary, introverted, and self-sufficient. This feature of rodeos presumably derives from the social selection processes through which an individual becomes a highly skilled rider; the personality features that are best suited to superior performance; and the cultural expectations of behavior within the activity and within the broader society. So an adequate explanation of this distinguishing feature of rodeos will probably invoke the processes of selection through which the performers are recruited, and the feedback and training they receive in the "minor leagues" of rodeo. Here the mechanisms are selection / filtering and training / inculturation.

Size of winnings. The size of the winner's purse depends primarily on the revenue structure of the sport, which depends in turn upon the popularity of the sport, the affluence of the audience, and the size of the national or worldwide audience for the sport on television. The purse serves as a primary incentive for the most talented performers; rodeo operators compete with each other for the top performers; and competition among operators pushes the purse to a level commensurate with the total revenues generated by the sport. The audience for stock car racing is much larger than that for rodeo, both regionally and nationally; and the purses are correspondingly higher. Here the mechanism is business competition.

Incidence of injuries. Riding a bull is a generally hazardous activity. So we would expect that riders will be injured. But so is driving a car at 180 miles per hour -- and yet the incidence of injuries in NASCAR racing is substantially lower than that in the rodeo circuit. So paying attention simply to the inherent danger of the activity probably doesn't explain the difference. Instead, it seems reasonable to ask whether there are institutional differences across these sports -- the structure of the safety systems that each embodies -- that account for different rates of injury in different types of performance. Industries that have developed genuine institutional commitments and rules governing safety generally demonstrate better safety records. So we might hypothesize that the culture of safety is less strenuous in the rodeo circuit than in professional football or stockcar racing. Here the mechanism is the institutional setting in which the activity takes place, including the presence or absence of penalties for operators with bad safety records.

The parking lot. We notice that the distributions of cars and trucks in the parking lots are quite different at rodeos compared to soccer matches. The vehicles come with their owners; so these differences must derive from differences in the audiences of the two sports. Here we have another example of selection: the composition of the parking lot corresponds to the selection of people who are interested in attending rodeos; this group has a set of tastes and preferences that favor F150s over other vehicles; and the result is -- a preponderance of pickup trucks in the rodeo parking lot. (And the trucks are in bad shape for several reasons -- the generally lower income level of the rodeo fan and the likelihood that he/she does a lot of back-country driving.) The mechanism here is -- social selection.

The silent audience. We observe once in a while that the audience at a small rodeo is plainly enjoying itself -- but there is almost no clapping or shouting. There is no roar of the crowd. Why so? Here we may find a cultural explanation in the background -- this rodeo is drawing an audience of Navajo people, and applauding and shouting are not the means by which Navajo fans express their appreciation and enjoyment. Here the mechanism is -- cultural practices.

What seems interesting to me about this example, is the fact that there are a number of quite different social mechanisms at work that lead to the particular characteristics of such a mundane activity as the rodeo. There is no single process we should point to as the explanatory foundation of rodeo phenomena; instead, there are selection mechanisms, business incentives, cultural practices, media promotions, and socialization processes for both participants and audiences that influence the activity as a whole. And, interestingly enough, these mechanisms can lead to some common characteristics across the set of what appear to be a fairly arbitrary set of activities -- public arenas where daring men and women ride large, dangerous animals for pay. The social characteristics of the audiences, the performers, and the local institutions defining the activity impress a unique stamp on these performances that distinguish them from other public entertainment activities such as circuses or NASCAR races.

But why do they enjoy participating in an activity which is necessarily cruel to animals? Worth a few PhD theses, no?