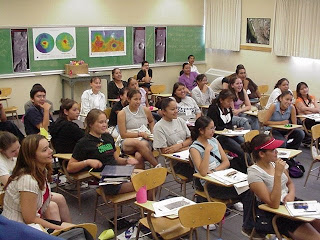 It seems like a very simple question with an obvious answer: education adds to one's skills and productivity; these enhanced skills make one more attractive in the employment market; and therefore, pursuing education is a rational investment in future lifetime earnings. (The economic impact of post-secondary education has been estimated to be at least one million dollars in additional earnings for the baccalaureate graduate over the high school graduate in the United States.) In other words, the simple answer appears to be that people make rational decisions about their investments in training and education, and they see the financial advantage that can be expected by having completed a degree program. More education is a valuable investment in future income, security, and status.

However, this answer stimulates quite a few difficult questions. Most fundamentally -- how are we to make sense of the behavior of the people who do not make this choice? The chart posted above indicates that in the United States, less than 30% of 25-29 year-olds have completed a four-year college or university degree -- and this percentage has only risen from 22% to 26% from 1971 to 1995. Moreover, this statistic does not include high school dropouts. So if more education is so plainly a rational investment, why is there such a low participation rate in the United States? Why do so many teenagers drop out of high school? (A recent study estimates that the drop-out rate in the Detroit public schools exceeds 50%, with some estimates going as high as 78%.) Why do many high school graduates choose not to apply to colleges or universities? (Only 36% of adults between 18-24 in the United States are enrolled in college or graduate school; Institute for Higher Education Policy report.) And why do under-educated but qualified young adults choose not to return to colleges or universities to complete their degrees? (In southeast Michigan, for example, there are more than 150,000 young adults between 25-34 who have completed some college courses but have not earned a degree.) So what are we to make of this evidence of dropping out, non-attending, and non-continuing?

Here are a few answers that have been proposed: some people lack the ability (or believe so) to complete their educations; some people lack the discipline to work hard today for a benefit that will only materialize in the distant future; some people lack the confidence that the normal opportunities that await university graduates will be available for them (because of racial discrimination or recession, for example); some people simply don't think clearly about their current choices -- they don't plan well for the future; and, perhaps, some people are not strongly motivated by material incentives (income, career advancement).

Most of these explanations make sense of the behavior by re-describing the terms of the choice -- thereby making the observed behavior "rational in the circumstances"; or they explain the behavior by referring to "failures of rationality" -- weakness of the will, miscalculation, indifference to future benefits. (Jon Elster's work has often focused on these sorts of failures; Ulysses and the Sirens: Studies in Rationality and Irrationality

.) But these explanations don't seem sufficient; they appear to dissolve the problem rather than explain it.

A second type of explanation of these social behaviors is one based on analysis of structural barriers to educational completion: poor schooling at earlier levels, racial or ethnic discrimination in the provision of educational opportunities, or economic obstacles to continuing education (tuition and the need to work fulltime), for example. To these structural barriers some social psychologists have added the factor of discouragement created in young people by ethnic, racial, or gendered stereotypes about performance. An important example here is found in Claude Steele's important work on "stereotype threat" and the major effects on performance that can be documented as deriving from stereotyped expectations. (Steele describes some of his hypotheses and findings in this Frontline interview.)

To these rational and structural factors, though, it seems relevant to ask whether there are also cultural expectations and community values that underlie the choices made by young people in various communities concerning education. There is the idea, for example, that midwestern manufacturing regions had developed a culture of complacency about education created by the availability of well-paid manufacturing jobs in the 1950s-70s. The easy availability of manufacturing work that required only a high school education led families to believe that their children didn't need good educations in order to succeed in the world of work they would be entering. This set of expectations, it is argued, led to a familial attitude that guided young people towards choices that gave little importance to advanced education -- and, for that matter, little attention to the importance of strong performance in K-12 schooling -- a kind of "Beach Boys" mentality (cars, parties, fun). It would be interesting to know what attitudes towards higher education are found in Appalachian mining communities -- is a college education valued by most families as a key ingredient of a good future, or is college education regarded as something foreign and unnecessary? And it seems that there is an opportunity for some good anthropological research on the Latino communities of the United States to help explain why high school completion rates and college attendance are lower than in other struggling communities in the United States.

So the question here is an important one: are there cultural values that work against placing a high value on educational attainment? What steps can be taken to mitigate these forces? And how do cultural, structural, and familial factors interact to give rise to low educational aspirations for a sizable percentage of the American youth cohort?

(I would like to see comparable statistics for Germany, France, and Australia. Any good sources out there?)
Posted by Dan Little at 8:00 PM