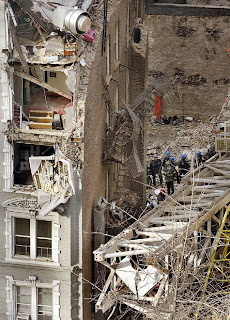 The recent collapse of a major skyscraper crane in New York City last month led to a surprising result: the arrest of the city's chief crane inspector on charges of bribery. (See the New York Times story here.) (The story indicates that the facts surrounding the charges are unrelated to this particular crane collapse.) Several weeks earlier, a Congressional committee heard testimony from three F.A.A. inspectors to the effect that the agency had permitted Southwest Airlines to fly uninspected planes (story), and some attributed this lapse to too cozy a relationship between the F.A.A. and the airline industry:

The F.A.A.’s watchdog role, to many Democrats in Congress who now oversee airline regulators, grew toothless. “We had drifted a little bit too much toward the over-closeness and coziness between regulator and regulated,” said H. Clayton Foushee Jr., a former F.A.A. official who led a recent inquiry by Mr. Oberstar’s committee. (story)

The basic systems of a complex society depend upon the good-faith commitment of providers to give top priority to safety, health, and quality, but they also depend upon regulation, inspection, and certification. Caveat emptor doesn't work when it comes to airline travel or working in a skyscraper; we simply have to trust that the airliner or the building is built and maintained to a high level of safety standards. The food we eat, the restaurants we patronize, the airlines and railroads we travel on, and the buildings we live and work in (and send our children to) provide complex products for our use that we can't independently evaluate. Instead, we are obliged to trust the providers -- the builders, the airline companies and their pilots and mechanics, the restaurant operators -- and the regulatory and inspection regimes that are intended to provide an assurance of quality, safety, and health.

And yet there are two imperatives that work against public health and safety in most modern societies: the private incentive that the provider has to cut corners, and the perennial temptation of corruption that is inherent within a regulatory process. On the providers' side, there is a constant business incentive to lower costs by substituting inferior ingredients or materials, to tolerate less-than-sanitary conditions in the back-of-restaurant areas, or to skimp on necessary maintenance of inherently dangerous systems. And on the regulatory side, there is the omnipresent possibility of collusion between inspectors and providers. Inspectors have it in their power to impose costs or savings on providers; so the provider has an economic interest in making payments to inspectors to save themselves these costs. (See Robert Klitgaard's fascinating book, Controlling Corruption

, for a political scientist's analysis of this problem.)

In a purely laissez-faire environment we would expect there to be recurring instances of health and safety disasters in food production, building construction, transportation, and the healthcare system; this seems to be the logical result of a purely cost- and profit-driven system of production. (This seems to be what lies at the heart of the Chinese pet food and toy product scandals of several months ago, and it was at the heart of the food industries chronicled by Upton Sinclair a century ago in this country.)

But an inadequate system of regulation and enforcement seems equally likely to lead to health and safety crises for society, if inspection regimes are inadequate or if inspectors are corrupt. The two stories about inspection mentioned above point to different ways in which a regulatory system can go wrong: individual inspectors can be corrupted, or honest inspectors can be improperly managed by their regulatory organization. And, of course, there is a third possibility as well: the regulatory system may be fully honest and well-managed but wholly insufficient to the task presented to it in terms of the resources and personnel devoted to the regulatory task.

These two tendencies appear to be resulting in major social problems in China today. There is little confidence in the Chinese public in building standards in even the major civil engineering projects that the country has undertaken in the past ten years (CNN story, BBC story), there is widespread concern about corruption in many aspects of ordinary life, and there is growing concern among consumers about the safety of the system of food production, public water sources, and pharmaceuticals (story). (The anger and anguish expressed by parents whose children were lost in collapsed schools in Sichuan appear to derive from these kinds of mistrust.) So one of China's major challenges for the coming years is to create credible, effective, and trusted regulatory regimes for the areas of public life that most directly affect health and safety.

But the stories mentioned above don't have to do with China, or India, or Brazil; they have to do with the United States. We have lived through a period of determined deregulation since 1980, and have been subjected to a political ideology that minimized and demeaned the role of government in protecting the health and safety of the public -- in banking no less than air safety. It seems very pressing for us now to ask ourselves: how effective are the systems of regulation and inspection that we have in our key industries -- food, pharmaceuticals, hospitals, transportation, and construction? How much confidence can we have in the basis health and safety features of these fundamental social goods? And what sorts of institutional reforms do we need to undertake?